The Last Glacier project is a collaboration of three artists seeking to capture the fading majesty of the remaining glaciers in Glacier National Park. At the time of its founding in 1910, the park contained more than 150 glaciers; today less than 25 remain, and the USGS predicts that these will be gone by 2020.

The USGS has been compiling a significant re-photography survey of the glaciers over time, and comparison of the photographs clearly demonstrates how rapidly the glaciers are retreating. The swift glacial retreat in Glacier National Park and elsewhere, creates radical changes in soil moisture content, an increase and alteration of fire frequencies, and the transformation of ecosystems and habitats. It also has profound implications for surrounding tribes, such as the Blackfoot Nation, whose ancestral lands both inside and outside the park will be negatively impacted.

Before the park’s name becomes a tragic irony, printmakers Todd Anderson, Bruce Crownover and photographer Ian van Coller decided to spend three summers hiking into 15 of the park’s glaciers to create artworks that challenge conventional representations of glaciers as sublime and stoic landscapes. The three artists have produced reductive woodblock prints and large-format photographs that convey complex stratigraphy within the ice masses, as well as a sense of their perpetual motion.

Though the works are aesthetically beautiful, The Last Glacier project invokes a contemplation of wonder and loss in the face of seemingly powerful and pristine landscapes. Glaciers have revealed themselves as inherently fragile, and more responsive to human impacts than we had imagined.

Todd Anderson and Crownover use reductive woodcut techniques to make original prints inspired by the glaciers in the park. They created layered landscapes that go beyond realistic representations. Their prints portray a larger truth about the glacial texture, mass, subtle colorations, and antiquity, which cannot be captured in scientific prose.

Both artists reconstruct what they witness first hand from memory and imagination. Their original imagery for the project is loosely sketched and colored in the field, and sometimes supplemented with photographs. Upon return to their respective studios, these sketches become more defined and increasingly elaborate, and are then painstakingly carved out of woodblocks. Each of Anderson’s reductive prints are like a jigsaw puzzle, requiring days of carving and weeks of inking, after which he printed the various layers of colors with multiple runs through the press. Crownover’s reductive methodology involved carving and printing every other day—up to as many as twenty times—to build an image while reducing the woodblock.

The glaciers themselves are evoked in the reductive nature of the medium, as well as the slow and repetitive woodcut process itself, which—like retreating glaciers—are carved and re-carved, resulting in a block that cannot be printed again. The final prints portray subtle shifts in line and color that convey texture and accentuate light, allowing us to contemplate details we might otherwise miss.

Glacial landscapes possess immense size and depth, yet have a deceivingly subtle and monochromatic surface architecture, making them an artistically formidable technical and intellectual challenge. Ian van Coller, the photographer in this collaboration, chooses to take a minimalist approach. He often eliminates the horizon and sky so that viewers have to engage with the piece to decipher the depth and scale of the landscape. Although van Coller’s photographs are particularly subtle, his images are rich in detail because they are made with a camera that captures more detail than the human eye can absorb. As a result, van Coller’s work makes the viewer feel as if he or she is situated within the terrain itself.

With the help of master bookbinder Rory Sparks, this collection of woodblock and photographic prints has come together as a large-scale, limited edition artist book.  The three artists individually made 15 editioned prints, each 25 x 38 inches, intending that the monumental scale of the book reference the monumentality of Glacier National Park’s landscape.

The work in The Last Glacier project challenges passive perceptions that glaciers are remote and irrelevant, or merely obscure curiosities as the last remnants of a distant ice age. The artworks created by Anderson, Crownover and van Coller are poignant tributes, rather than scientific documentation or political bludgeon. The works effectively translate our understandings of the impacts of global climate change into a comprehensible human scale. This work allows us to contemplate the glaciers’ waning grandeur, and why it is that we should care about their fate. 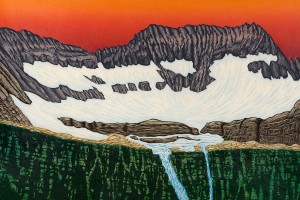 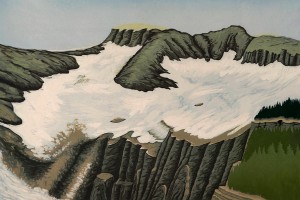 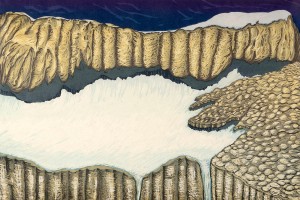 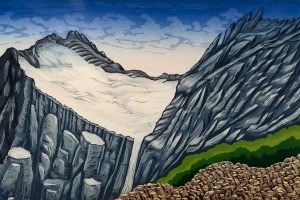 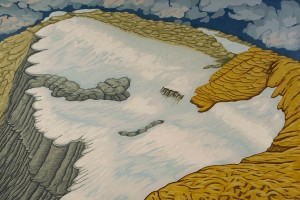 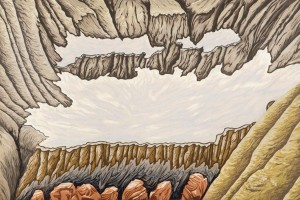